Opening up a ThinkPad Chromebook 13 and Fixing Loose Touchpad 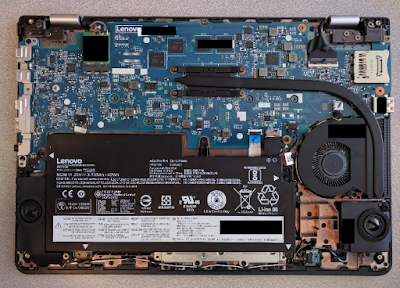 Although I resisted for a few hours, I decided that the wobble I was experiencing in my new ThinkPad Chromebook 13's touchpad needed to be fixed. I decided to open up the case and fix it myself. It was surprisingly easy. I shouldn't have had to do it at all, but it beat trying to explain an issue of "feel" to a tech support agent. Here's how to do it if you run into a similar issue.

First things first, ensure that the thing is actually OFF! I explicitly shut down the Chromebook and made sure it wasn't going to turn back on accidentally. Also, be careful in there and don't touch anything you don't need to. I'm not responsible if you short something on your T13!

I then began by removing the three rubber screw covers that were self-adhered to the screws towards the front of the Chromebook. They're the ones circled at the bottom of the picture below. Sliding a push pin down the edge of them makes it pretty easy to release them from the adhesive holding them in place. I then proceeded to loosen all 9 screws marked in red below. Only one of them was able to be extracted all the way. It's okay if you don't extract them all the way, as long as they're completely loose. 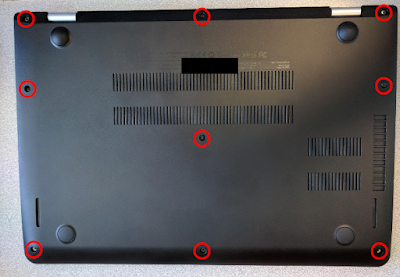 From there I started in front left corner and used my fingernail between the edges of the lower and upper frame to get the pieces to click apart. I worked my way around the circumference popping the plastic pieces apart. Be gentle, go slow, and it shouldn't be difficult. That exposed the underside of the Chromebook's boards. 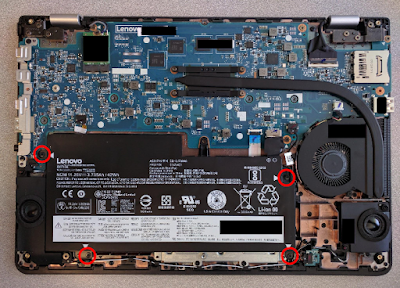 The four screws circled in red hold the battery in place. I removed them and carefully lifted up the battery to reveal the touchpad. The battery can be completely removed by detaching it's connector cable carefully. You can fix the touchpad without removing it, but it requires a little more dexterity to support it while dealing with the screws. If you do choose to disconnect the battery you will need to plug back into the charger to reboot the T13 after reassembly. 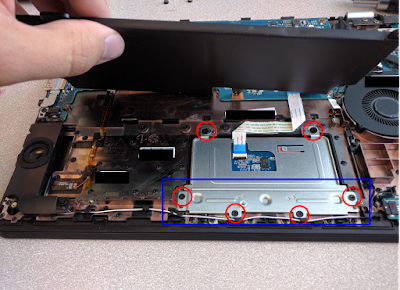 The root of my issue turned out to be the aluminum plate that is highlighted with a blue box here. All 4 screws securing it were somewhat loose. The two screws holding the touchpad itself were loose as well. Just to be safe I pulled off the entire support plate to check the contact surface. 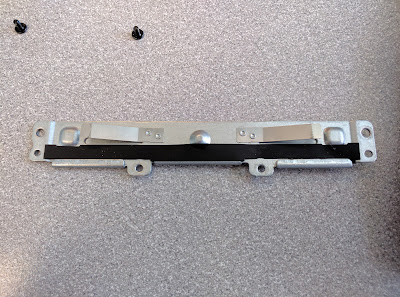 I'm glad I removed it. I found that the center contact point (where the touchpad is supposed to rest) was partially obstructed by the black strip shown just below it. The rest of the circle was perforated, but had not been removed. I removed the perforated portion of the strip and re-secured the aluminum plate.

I thought this would fix all the problems but there was still a slight wobble in my pad that I was hypersensitive to. I reopened and made one other change to eliminate the last wiggle from my machine. Right in the middle of that center contact circle I added a small piece of electrical tape, about 3mm x 3mm. This is the same technique described here for an XPS13 with similar symptoms. It fills the extra space between the touchpad and the contact point and eliminates the wobble. This little piece of tape finally and fully corrected the last bit of wiggle in the touchpad on my particular machine.

A note: I went a little farther than the disassembly showed above and actually removed the entire trackpad unit from the machine. As part of that process I detached the connection ribbon to the touchpad. When I put it back together, the adhesive surface of said ribbon didn't stick down quite perfectly and led to a sticky sound every few swipes with the pad. After about 4 days of use this settled down and I now feel like I've got a perfect machine back in action. If you can avoid detaching this ribbon cable (the processes described above don't need it to be removed!) then do so. The guy in the video fixing the XPS pad had to remove his touchpad because the center contact point is built into the frame, but the T13's contact point is removable by screws. Leave your touchpad in the machine and save yourself some extra frustration!

With all 6 of the trackpad screws properly tightened and the extra piece of electrical tape added, the trackpad is fully stable the way I expected it to be out of the box. Hopefully this helps if your T13 or a similar notebook with a loose or wobbly Synaptics touchpad exhibits similar symptoms.
Chromebook howto Lenovo repair teardown ThinkPad