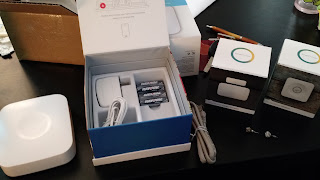 This week I moved my connected bulbs and switches from Wink to a SmartThings V2 hub. I also had the opportunity to set up some of my first sensors. I encountered a few hiccups, but on the whole I'm impressed. Read on for a more thorough look at the setup process.

Opening the hub box was immediately a better experience than Wink where the hub and power adapter were literally the only things in the box. The SmartThings hub included batteries, an ethernet cable, and some basic instructions on getting it installed. The box had a cool magnetic clasp to it, but what's more important is the inclusion of batteries and ethernet cable, something that it seems a lot of companies just assume I'll have laying around nowadays.

I connected the hub, and it lit up immediately. After installing the app and logging into the SmartThings account I had previously created, I was prompted for my hub's code which was clearly printed on an insert in the box. My hub was quickly found, and then began updating and setting itself up. 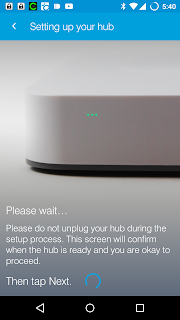 It then proceeded to stay on the above setup screen for about 10-15 minutes with a purple light on the hub. It would have been nice if the screen provided some indication that things were actually progressing, or a warning about the amount of time it would take. Finally, it completed, and prompted me to name my home, and tell the hub where it is located. It pulled my location from my phone's GPS and was immediately in the right place. Next, it was time to add some Things. I started with adding one the SmartSense Open/Close sensors that shipped with my hub. 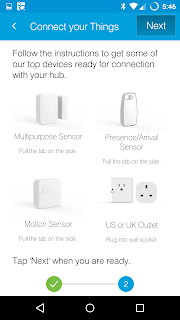 I pulled the tab on the sensor, and SmartThings immediately searched for and found my first sensor. without difficulty. I worked my way through the next few setup screens which guided me through the layout of the new app. During this process I was also prompted to add my phone as a presence sensor and choose how I wanted to configure my Smart Home Monitor. (I'll have more on that in a later post about how I've configured my system).

I then proceeded to start migrating my lights and switches over. I've got about 7 GE Link bulbs throughout the house, and started by resetting one of them. The SmartThings hub found the light easily. 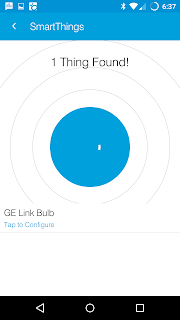 I was able to get the bulb added, and prompted to configure a lighting automation for it... and then was told I wasn't authorized. 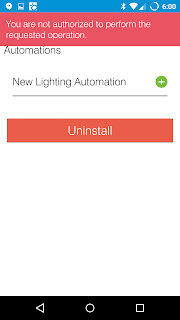 I forced my way out of the app and came back in and was able to configure automation for the bulb. I never saw the "not authorized" screen again, but it's worth noting that it came up in my testing. The bigger issue came when I started to add additional bulbs into the system. After resetting each bulb while searching in SmartThings, most of the time it would just hang on the "looking for your new Things" screen. 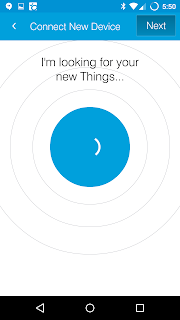 I'd end up going back, and finding that my bulbs had successfully paired and shown up in the "Not Yet Configured" list, I just hadn't been prompted on the "looking for your new Things" screen. I eventually got all the bulbs added in, but the lack of consistency in the process was somewhat frustrating. All told, on day 1 I successfully paired up 7 GE Link bulbs, 2 Leviton in-wall switches, a Leviton appliance controller, an open/close sensor, and a motion sensor.

I then began to play with some of the automation features and found that the setup on here is very straightforward, and allows me to easily program in all the things my Wink Hub was doing and then some. It was easy to setup a timer with the Smart Lighting SmartApp to control my porch light for sunrise and sunset. The idea of Home/Away/Night modes based on presence sensors was easy to configure, and I was then able to tie that into features such as automatically turning on the living room lights when I open the front door, but only if the presence system has determined that I am home. My girlfriend was excited to see the living room light come on when the door opened, rather than having to shout out "Alexa, turn on the living room light" when we get home (More on integrating with Echo/Alexa in another post). 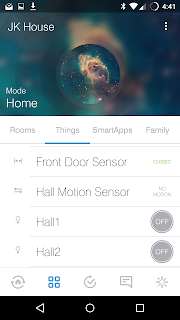 Apparently the dashboard has also been dramatically changed from previous iterations of the app; a fact I confirmed by sideloading the old version. Unfortunately these groupings are no longer supported on the new hub and app for the so-called Dashboard. Right now my dashboard just has 2 green lights whereas people on v1 hubs and the old app have much more information here.

As for the local processing capabilities of the new hub, when it comes to the local control of switches and lights its' a downright phenomenal improvement over the Wink Hub. Unfortunately I haven't gotten to use a SmartThings v1 for comparison, but the response here is on par with that of the Hue system. My own Wink hub's cloud-based processing always had a perceptible lag time in turning lights on and off, and sometimes requests would just evaporate into the net. No such issues here after 3 days of use.

I'm also thrilled to find the how much the developer community is extending the SmartThings platform. I've only just begun to dabble in my first few days, but if you can imagine it, then someone likely has written it, or will be willing to take it on. For instance, developers have written the Nest into SmartThings, even though the two services aren't officially linked yet. I'm now able to use the presence features of SmartThings with my phone to control my thermostat setpoints automatically, a feature still (officially) lacking from Nest in my 3+ years of ownership.

One of the minor issues I've had, is not being able to add additional users to my house. This is a documented problem which it appears is attached to them improving the sharing features (hopefully to limit what different people can do to the home controls). It's not a big deal for me, I just logged in on my girlfriend's phone and added it as a separate presence sensor for her. This use case may be a no-go for other folks though.

Home/Away location determination is based on a somewhat wide GPS bubble. I have to get several streets away before I'm outside of the bubble where SmartThings thinks I am home. This is great when I'm actually AT home as it doesn't unintentionally arm the security system. However, it is a problem if we go to eat at the restaurant down the street and the hub triggers thinking I'm back at home. Utilizing a combination of our local WiFi, and the presently disabled Bluetooth on the v2 hub might be a better option.

Thumbs up
Thumbs down
On the whole, the new SmartThings feels like a more cohesive package than Wink ever did to me. The vastly improved response times and the home/away/night system made it easy to set up different complex automation setups and should reduce my reliance on Alexa and my phone to control my system. So far, it passes the girlfriend test as well! The fact that this new hub and software are just in their infancy yet still performing all my desired tasks makes me excited about how it will work moving forward. My Wink is going in a box.
connected home review smarthome SmartThings