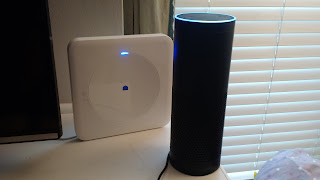 In a rare bit of Prime Day luck, I picked up an Amazon Echo. It turns out it's stupid easy to set up with the Wink Hub and now I can voice control all my lights. The interaction with Alexa is faster and more convenient than accessing the Wink App on my phone, and is the "smartest" my smart home has felt since I installed my first connected light. Read on to see the setup process and the control in action.

To be honest, I didn't particularly want an Echo until I found out they added support for the Wink Hub last week. For a feature that was just launched a week ago, and a very new SDK, the setup was surprisingly smooth. After activating my Echo, there was a card informing me of the new available connected home integration. 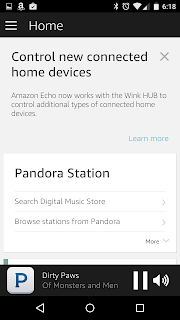 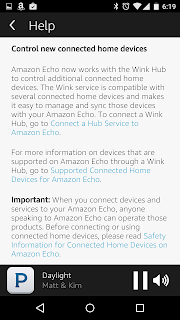 I followed the directions and went to my Echo settings for "Connected Home" and chose to "Link with Wink." I was prompted to login to my Wink account 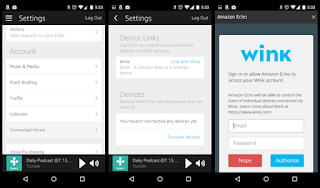 At this point I was stubborn and immediately tried "Alexa, turn on the living room light." I realized after the fact that I had missed the second menu option to "discover devices" which needs to be performed after logging into Wink.

However, in a case of very graceful error handling, Alexa told me she hadn't discovered any devices yet, and asked me if I wanted her to discover devices on the network. She warned me that if I had a Hue bridge I would need to press the pairing button, and that discovery takes about 20 seconds. A few seconds later she said she had found 4 connected devices (my 4 Wink bulbs) and added them. They display in the app below 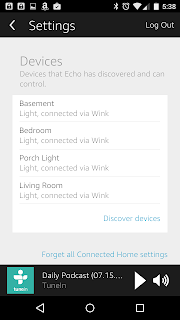 Just like that, all my bulbs were configured. I then ran around the room shouting at Alexa to turn the lights off an on, with great success. Once or twice Alexa processed the command and said "OK" but there was never a flash on the Wink Hub and the bulb would not respond until I repeated the command. Given that this has been par for the course when using Wink's own app, I'm inclined to blame it on the hub rather than the Echo. It's certainly a faster process than opening the app on my phone and setting the lights, and the usual delay in the Wink seems reduced (even if it actually might not be). The combination in action:

I was expecting difficulty setting it up, but I really couldn't have asked for a smoother process. If anything, the most difficult part was editing the above video because it kept turning my lights on and off. Kudos to Amazon on the Echo so far.