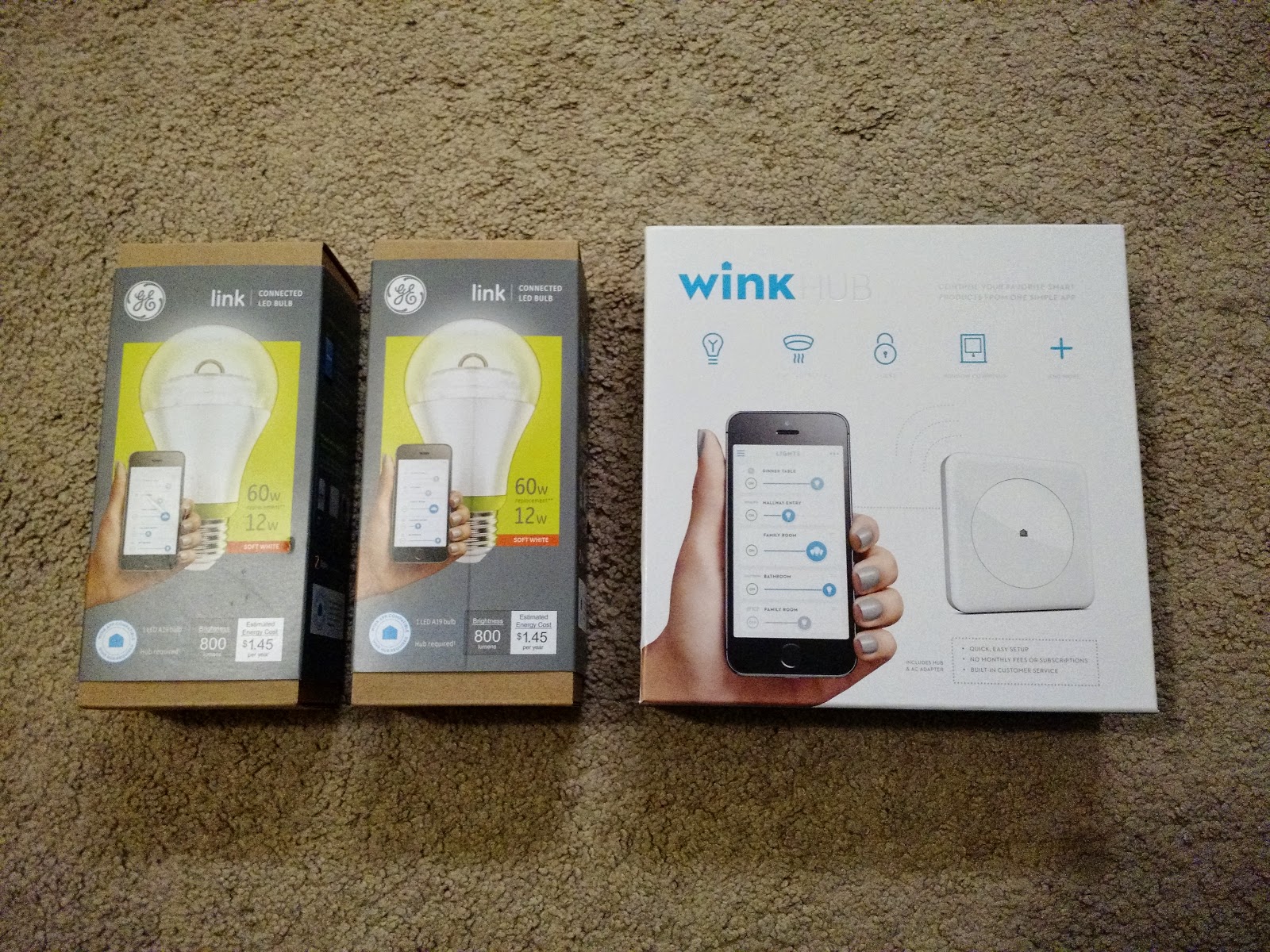 With a Thanksgiving deal this year making a Wink Hub effectively free with the purchase of 2 GE Link bulbs, I ordered a set. I've been intending to switch to LEDs as my compact fluorescent bulbs burn out, and if I can get a free gadget to tinker with then that's even better. I now have lights I can control from my phone after a somewhat frustrating hour and a half setup process.

I had installed the Wink app and signed up for an account ahead of time, with no difficulites. Upon opening the boxes, there isn't much, just two bulbs, the hub, and a power adapter. I fired up the app and chose the option to add a hub and was greeted with a video explaining that I needed to plug it in, go through the prompts to share my wifi settings to the hub, and then I would be all set. Super simple... Not quite.

Online research had warned me to keep the Wink Hub several feet from the router, as well as the fact it only connects to 2.4 GHz signals with WPA or higher security (No support for 5GHz or WEP). I have my network configured with the same SSID for both 2.4 and 5 GHz, as well as the same WPA-PSK so that the handoff happens smoothly on all my devices. As a result, the Wink app displayed two of the same SSIDs and I couldn't tell which was the 2.4. I gambled 3 times and each time got stuck at a "Please standby while the Wink Hub connects with the server." Headed to my router settings to temporarily change my 5GHz SSID, ensuring I was trying to connect to the right network and still got stuck at the same error. After each attempt I had to go back to my wifi networks and remove the now saved "Winkhub" wifi network or else my phone would try to kick back to it and access the internet. Very frustrating. After a few dozen failed attempts (and several unplugs of the hub) I tried pulling the whole thing out into the center of the room.

The wizard on the phone then helpfully guided me through updating the firmware on the Hub. It took a few minutes, and then was up and running successfully on the latest firmware (00.33 as of this writing). For what it's worth I had no difficulty with the firmware upgrade as some of the Amazon reviewers had.

I then tried to add my bulbs and began phase 2 of my frustration. Turned on a bulb to see that it actually worked, and then followed the directions in the Wink app to add a light. Stuck waiting to get a "next" button on a screen telling me my hub is ready and to wait 5 seconds to turn on the lamp. After a few tries and several manual resets of the bulbs, and an additional move of the Hub, to another part of the room, I successfully got them connected. I don't know what finally made it work, but once the bulbs were connected I had no problem getting the Hub to control them from any location I plugged it into within my apartment. The trick finally seemed to be to reset the bulb and turn it off, initiate pairing from the app, wait until the Hub begins blinking, then turn the bulb on so it starts pairing.
(The bulbs can be reset by turning on for 3 seconds, off for 3 seconds, and then repeating the off on process 5 times).

So, an hour and a half later, the bulbs and hub are now operational. We'll see how the stability is as some folks online seemed to have had issues with the Hub disconnecting over time. I've verified that I can now control the bulbs from both within my LAN as well as connected to an outside LTE signal. My advice to people trying to get their Wink Hub set up:
As of now, it seems like this product is functional, but still frustrating to get set up. Stability seems consistent after setup; I think there are just some serious flaws with the in-box firmware. Now that my Hub is updated, it hasn't seemed to matter where I move it to. Now onward to play with the capabilities of the app!